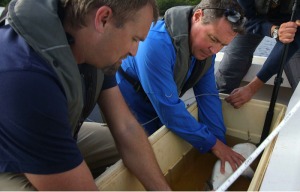 Mike Heithaus and his lab have been conducting research on the role played by top predators in the Everglades’ transition zones between saltwater and freshwater since 2006. Their research has focused on the alligators and juvenile bull sharks that make their home in the Shark River basin of southwest Everglades National Park.

The team captures individual animals and attaches transmitters to them in order to track their movements in and near the Shark River Slough in an effort to better understand their behavior. The goal is to anticipate how these animals will respond to the changes in the water flows that will inevitably occur as part of an ongoing large scale restoration project which will re-direct fresh water back into the Everglades, and to ensure these predators continue to fulfill their critical ecological role in the food web.

As part of the Florida Coastal Everglades (FCE) Long Term Ecological Research (LTER) Project, the Heithaus lab has discovered that contrary to popular belief, some juvenile bull sharks take the dangerous risk of traveling back and forth from the mouth of the river, where it meets the Gulf of Mexico, in order to hunt. Although these juveniles are more at risk than those that opt for the continuous safety of the river, they also have access to a wider variety of prey.

Even more surprising, the Heithaus lab has found similar patterns of behavior among alligators despite the fact that they are largely intolerant of saltwater. From November 2007 to December 2009, the lab tracked 16 alligators for at least six month periods. Of those, at least nine regularly moved between the saltwater of the Gulf of Mexico and the brackish water upstream with some traveling even further, up to 25 kilometers into freshwater territory. These trips were made between 13 and 52 times during the study with alligators staying an average of 6.6 days per trip and a few up to 60 days.

Dubbed “commuters” these alligators receive the same benefit of wider access to feeding grounds as the juvenile bull sharks. The ecosystem benefits from this as well, with alligators and bull sharks depositing nutrients gathered in the gulf into the nutrient poor estuaries of the southern Everglades. Ultimately the Everglades restoration should make this commute easier which will continue to improve nutrient levels in Shark River.

Follow the predators as the lab tracks them via tracking.fiu.edu.