We conduct research on dolphins in Shark Bay, Western Australia and the coastal Everglades. During his time with National Geographic, Mike helped other scientists by deploying “Crittercam” on humpback whales, pilot whales, false killer whales, and bowhead whales. Recently, the lab started a study of deep-diving species in the Caribbean. 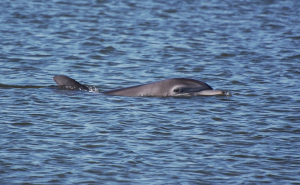 Dolphins of the Everglades
Marine mammals feed at multiple trophic levels and occur from freshwater to open-ocean ecosystems of all latitudes. Due to their abundance, large-scale movements, and high metabolic rates, they have the potential to affect the structure and function of ecosystems from both top-down and bottom-up pathways. Bottlenose dolphins (Tursiops truncatus) are an abundant top predator of the coastal Everglades. We’re investigating trophic interactions of dolphins and how these interactions might vary within and among habitats. To reveal the factors influencing their habitat use and foraging decisions, the team has conducted a combination of boat-based sighting, photo-identification, passive acoustic monitoring using C-PODS, and biopsy sampling throughout the Shark River Estuary, Whitewater Bay, Florida Bay and coastal waters of the Gulf of Mexico. 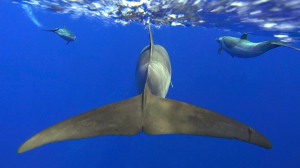 Whales and Dolphins of Guadeloupe
In 2014, the lab initiated a study of sperm whales and other cetaceans offshore of the west coast of Guadeloupe in the Carribean. In collaboration with SPAW-RAC, and funded by the Total Foundation (France), the team is using  animal-borne video cameras developed by Exeye Ltd and biopsy sampling to study the behavior of deep-diving species. From the biopsy samples, it is possibe to measure contaminant loads, conduct genetic studies, and analyze the chemical composition (stable isotopes) of skin and blubber. Together with the behavioral data from the video cameras the team will be able to understand foraging behavior and patterns and potential threats to a variety of species, especially sperm whales. Educational activities including video projects for students will also be developed.