Mike is the co-lead Principal Investigator of the Global FinPrint Project. Global FinPrint is a Paul G. Allen initiative that brings together an international research team and collaborators around the world to fill a critical information gap about the diminishing numbers of shark and rays (elasmobranchs) on coral reefs. The project launched in summer 2015, with a multi-institutional team conducting surveys of sharks, rays, and other types of marine life on coral reefs using baited remote underwater video (BRUV). The research will improve our understanding of how elasmobranchs influence the coral reef ecosystem and how humans impact these species and their habitats. Ultimately, the consolidation of this collaborative global research into one single analysis will aid management and conservation efforts for sharks and rays as well as coral reefs worldwide.

FinPrint is highly collaborative and the Heithaus lab is sampling, and supporting sampling of partners, around the world.  Sampling is already underway in Florida, the Bahamas, New Caledonia, French Polynesia, Madagascar, Cuba, and Guadeloupe.  More sites will be coming online quickly.  You can follow along at globalfinprint.org, @globalfinprint, and the lab blog!

In addition to FinPrint, we are conducting more detailed studies in several locations. Below is an account of one of our early – and ongoing – reef shark projects: 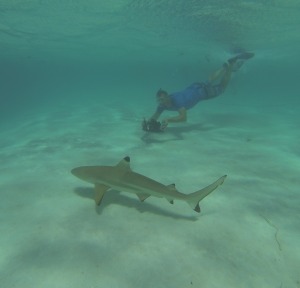 In October 2013, Mike Heithaus, Jeremy Kiszka, Johann Mourier, and Linda Heithaus launched a study of the reef sharks that inhabit the coastal waters of Moorea, an island in French Polynesia. Using animal borne (or shark cams) and stationary cameras, the goal of the study is to investigate the feeding and behavior of a variety of reef sharks, especially blacktip reef and sicklefin lemon sharks, and their importance to the health of the reefs. Because Moorea offers shark feeding as a tourist attraction at designated sites, one  goal of this study is understand how feeding of sharks changes their behavior and their role in the ecosystem.  Also, the lab hopes to be able to use these feeding sites as a “natural experiment” to better understand the importance of sharks to the health of coral reefs. 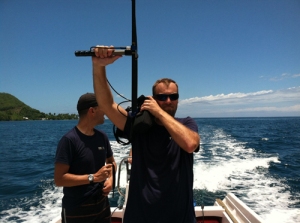 Tracking shark-cam after it has released.

The lab caught large blacktip sharks in order to mount and deploy the shark cam, flush stomachs to determine what they had been eating, and collect blood samples and small clips from the fins. These samples were used for genetic studies and to assess chemical markers, called stable isotopes, that help determine where and what the sharks might be eating. These samples also provide insights into whether the sharks eat the same things all the time or if their diets change. The team also collected samples from numerous fish species, which is important for using stable isotopes to better understand the feeding ecology of sharks around Moorea. 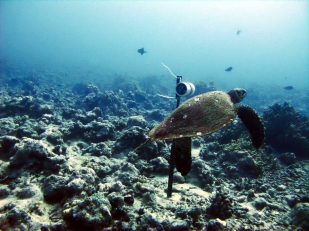 A sea turtle swims past a monitoring camera.

Stationary cameras, that recorded for seven hours, were set-up at multiple stations along the forereef both close to and far from shark feeding sites to get an idea of how many sharks were in different areas of the reef and how the number and types of fish – as well as reef health – differ between places with lots of sharks and those with few.

A total of 60 total cameras were deployed during 15 days capturing roughly 350 hours of recordings. The mounted stationary cameras on the reef gave an impressive sample of reef fish dynamics near and far from shark feeding sites. Species observed included blacktip reef and lemon sharks, hawksbill turtles, dolphins, large predatory fishes, and many smaller fish species. In addition to basic numbers of reef species, the cameras allowed the lab to investigate the behavior of the sharks and fish. Video from the stationary cameras show many sharks, especially the cameras closer to the feeding site. Check back to learn the results of this study and our best video clips. 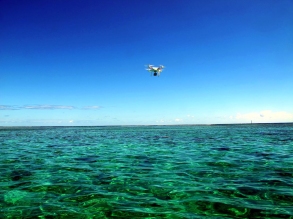 One of the most exciting tools we are using is a video camera mounted to a quadcopter. By flying along set lines (called transects), the team can assess shark and ray numbers on the shallow reef and in the nursery areas.  By flying along these transects multiple times it is possible to see how many animals are in different parts of the reef and how their numbers change through time. 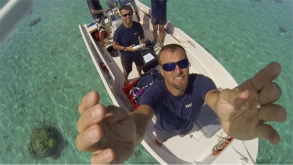 Jeremy Kiszka pilots the drone back to the boat, where Mike catches it.

While the quadcopter gives data on shark numbers, Johann has found that individual sharks can be identified using the patterns of coloration on their dorsal fins. To see how many individuals use the site where they are fed, in 2013 the team conducted underwater photography sessions lasting between 15 and 40 minutes.  During the month-long mission, 64 different blacktip reef sharks (33 females and 31 males) were identified with a maximum of 47 sharks during one session.

In 2014, the studies in Moorea have continued and the lab is expanding its work to Tetiaroa in collaboration with Dr. Aaron Wirsing at the University of Washington.  Tetiaroa is also in French Polynesia, but – as a coral atoll – represents a very different type of habitat to investigate similar questions.  Research in Tetioroa will also take advantage of shark feeding tourism to address questions of the ecological importance of reef sharks. Follow the Heithaus lab blog and Facebook page to stay up-to-date on the latest lab research and check back here for more updates.